I recently took possession of a maxi pleated skirt, navy blue, all long and flowing, but to my chagrin I've discovered it doesn't really go with any of the tops I thought it would. At least none that is appropriate for the office or without me looking like some 19th century missionary teacher. I eventually checked out some looks online and my favourites were the following: 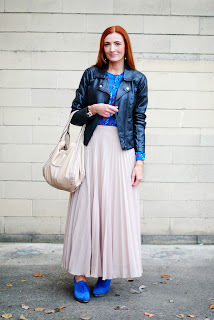 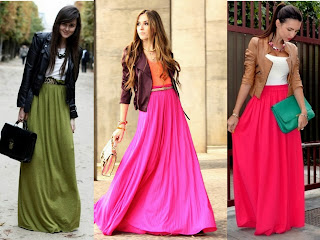 With the t-shirt and leather jacket: Guess there's no need to reiterate my love for the leather jacket.......I so love this look, its just how I would convince people it's a fashion statement and I'm not crazy is the problem. I did try replacing the leather jacket with a normal work jacket, like Rachel Bilson below, but somehow it didn't work....... 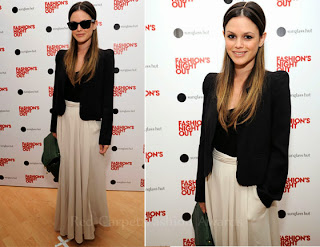 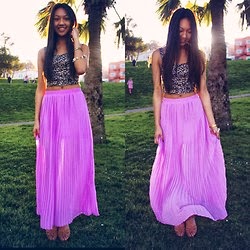 I like the midriff baring top matched with the maxi pleated skirt. The demureness of the maxi skirt paired with the midriff top totally works. Again this is just a wish, because after 2 kids, I doubt anyone (least of all me) wants to see my midriff.

*Word of advice; do not try this look unless you have a super-toned midriff.

I like the effortless look of pairing the skirt with a plain tank top and sandals or flats. Though I've learnt from experience that this look is not so easy to pull off. You could just end up 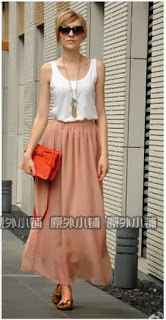 looking frumpy and lazy, besides its ok for meeting up with your friends but not the work place.

Anyway, after much searching, I realized none of the above ensembles worked for me, so working with what I have, I settled for this look. 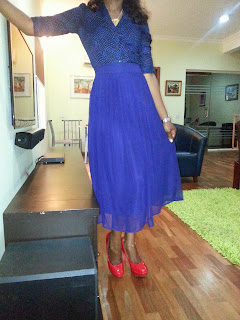 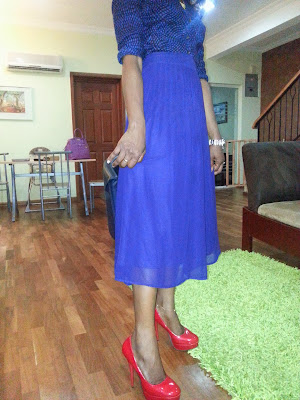 Posted by Omotara's Space at 5:42 AM 3 comments: Links to this post

﻿﻿﻿
I was at Johnny Rocket in Victoria Island, some time ago. I had been craving a good burger and wanted somewhere that I felt dealt solely with burgers. I liked the "grease", 1950's theme, juke box and all. I wasn't so crazy about the burgers though, or more like the price I had to pay for it. The burgers range from about N2100 to N3800, depending on the type of burger and if it's a single or double patty, but get this.......Its just the burgers alone! No chips (fries), salad, nada! Now that's a first, at least for me. If you want chips, you pay an extra N600 or N900 for half or full portions respectively.
The burgers were not bad (I had the smoke house, single and my partner had the bacon cheddar, single), but rather unfilling. My take on it was, if the burgers do not come with chips or anything, then they must be worth the price, right? On the plus side, my chocolate shake was one of the best I've ever had.


Anyway, so I was in the states a few weeks ago and decided to eat at Johnny Rockets (in New Jersey). I ordered the chicken club sandwich, and guess what?? It came with fries......I felt all was right in the universe again.
The burgers here also come with fries or a side salad, though I later learned it's not all the Johnny Rockets that the burgers come with  fries. My sandwich was tasty but it was a struggle to finish it as it was so filling, my daughter loved her hotdog (and believe me she is a fussy eater), and again my chocolate shake was divine. We paid about S16 (under N3000) for the whole meal, compared to the N8000 I paid in the naija Johnny Rocket for two single burgers (NO fries), a shake and a soft drink. Guess that's the cost of living in Lagos for you!

P.s. I never got to see the staff dance in any of the Johnny Rockets, though the thought of anyone wanting to see these minimum wage earners be humiliated in such a fashion is beyond me.
Posted by Omotara's Space at 4:47 AM 2 comments: Links to this post